Edit the VRA to change the connection method (VIB or password), host password, VRA bandwidth group, or network settings for a VRA, for example when the gateway to the VRA is changed.

The Edit VRA dialog is displayed. 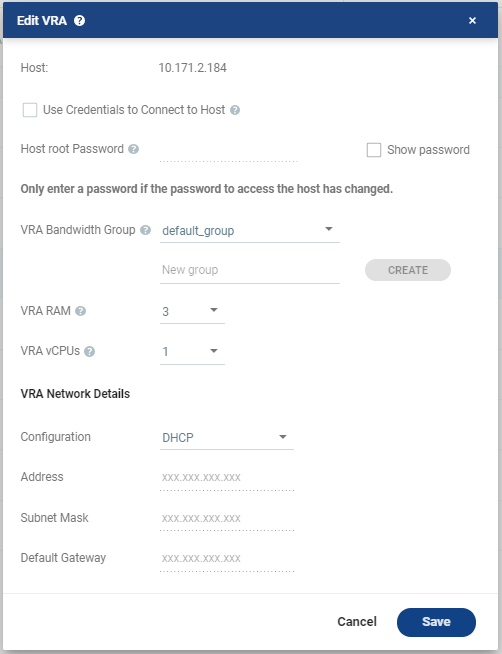 The amount of memory to allocate to the VRA.

The amount determines the maximum buffer size for the VRA for buffering IOs written by the protected virtual machines, before the writes are sent over the network to the recovery VRA.

The recovery VRA also buffers the incoming IOs until they are written to the journal.

If a buffer becomes full, a Bitmap Sync is performed after space is freed up in the buffer.

For details, refer to Zerto Scale and Benchmarking Guidelines.

The number of vCPUs to allocate to the VRA.

Note: If the VRA RAM or VRA vCPU is changed, upon saving the new configuration, a message will appear to inform you that the VRA will power off to complete the requested update.

Note: Zerto strongly recommends using only Static IPs on the production site.During trials you may use either static IPs or DHCP.The reason for this is that if the VRA IP is allocated via DHCP and the DHCP server at a later date allocates a different IP, ZVM does not change the VRA IP in the ZVM records.

The following folder is created as part of the VRA installation and must not be removed:

Where <storage_name> signifies the target host.