This KB explains how to read the Zerto GUI in order to identify the required bandwidth for replication.

Navigate to the Zerto UI

Below you can see the Zerto dashboard up to version 6.5. It was changed in later versions, but the concept remains. In order for us to remain proper sync between the sites, we need the WAN Traffic(B) to remain at least as high as the Throughput(A) after it was compressed(C)

We can see that the throughput is 33 MB/s while the compression is at 99%, which means that we need only 0.33 MB to sync in this case.

We will suppose that the throughput is 200 and that the compression rate is 40%. That means that we need 120 MBps to replicate after calculating 60% out of 200 Multiplying 200(Throughput) * 0.6(1 - 0.40(Compression)) = 120 (Needed WAN Traffic speed to maintain replication).If the WAN traffic is lower than the required value, we can expect a sync

We can see that the Throughput is at 4 MB/s at the moment(although spiking up to 90) and that the compression rate is at 50%. That means that at this moment we need 2 MB/s of WAN traffic to properly replicate the data. However, we seem to reach a ceiling of some sort at 1 MB/s. This is called clipping. When we have a case of clipping. We understand that something is limiting the WAN traffic: 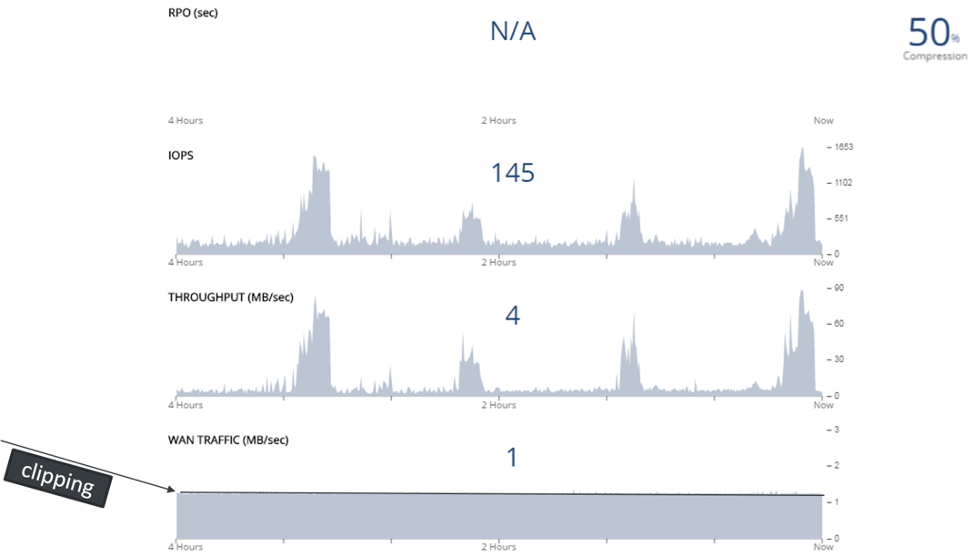